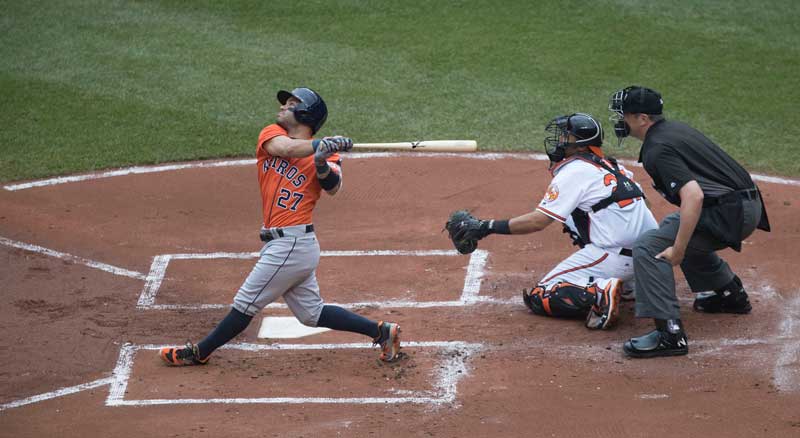 There are only 28 hitters in the Major Leagues that have a batting average over .300.  Said another way, just 28 players at the highest level of the game can barely get base hits more than 3 out of every 10 at bats.

At just 5 feet, 6 inches, Jose Altuve is a player in very rare company these days as his accolades mount. He has won the batting title two out of the last three years, and is well on his way to doing it again this year.

After watching a mini-documentary on Jose Altuve, I proclaimed to anyone that would listen before the season began that Jose Altuve would yet again show why I think he’s the best hitter in baseball.

My prediction looked a bit pathetic at the start of the 2017 season. Jose Altuve started 1-for-25 at the plate.  A neighbor and coach friend of mine even razed me about my forecast: “Looks like the pitchers have your boy Altuve all figured out!”

“Hogwash,” I responded. “The season has just started. You’d have to be an idiot to give up on a franchise player like Altuve during a slump.”

Which is true. A franchise player starting the season in a slump that will most certainly be short-lived is hardly someone you give up on or trade away – ever.  I know I wouldn’t put him on the trading block for a slow start.

For one thing, there is no way to emulate big league pitching during hitting practice in the off season. It takes a while to adjust to 100 MPH fast balls that are cutting, sinking, and swerving toward and away from the hitter as they breathtakingly hum across the plate. Then, there are the insane junk balls that big league pitchers can follow their death balls up with.

To start the season slow against wicked MLB pitching isn’t all that uncommon (until hitters start to acclimate to in-season live pitching), and hardly something to worry about with a hitter like Altuve.

Plus, pitchers were fresh as the season began, and they more than likely studied Altuve’s batting habits going into the season since he was, after all, the 2016 batting champion of the year. As a result, a slow start for Altuve really wasn’t a big deal – except for those that lack the patience and faith to stick to true winners.

In investing, investors or traders often trade out of the most talented, aligned, and most successful CEOs because they let the short-term manic market influence their decisions like the market “knows” something or because the management team appears to be in a rut with their stocks going “nowhere.”

As a money manager, I can’t tell you how many times over the years I had to endure the sporadic noise about how “Buffett has lost his way” or “Buffett doesn’t get it anymore” or “Buffett should do this or that” while his company’s stock price languished.

Go back to the 1970s, it would have been idiotic to have ever given up on Buffett during short-term market slumps.

The main takeaway is that when you own dominant Income Money Spinners or Superinvestor Wealth Compounders, which generate substantial free cash flow, and you own them at reasonable prices…  you should never throw in the towel, or you’ll likely check back later and want to beat yourself up for losing your patience.

A year or so ago, I posted a study that showed that the long-term returns for your average investor has only been 2% a year over decades, and that Fidelity did a stellar study on which  retail accounts performed best over the long-term.

To Fidelity’s surprise, investors that forgot they had accounts completely and hadn’t been active in them for literally years outperformed all the other accounts at Fidelity by large margins. In other words, trading is bad for your wealth and your health compared to “sitting on your ass investing,” as Charlie Munger puts it. This is especially true when you own superior companies with superior management teams.

Good investing often entails having to be a little slothful, becoming a gentleman of leisure and finding other outlets to suck up your energy and time instead of making poor portfolio moves because you just can’t sit on your hands and do nothing.

It also means sticking to the great shareholder-friendly companies and letting Superinvestors’ return on invested capital work for you over time.

With nearly every research report I read, I’ll be 4, 5, 12, or even 30 pages into the analysis without a single mention of the talent running the company and whether or not they are proven capital allocators, and aligned managers.

A company can earn all the cash in the world, but if it is unfairly diluted via options, doled out as bonuses, or poorly allocated, the entire set of numbers is meaningless – no matter how beautiful the inputs look on a spreadsheet. You’ll make out poorly with bad people running your companies, no matter what the math claims in a spreadsheet.

At FMT Investment Advisory, our research starts with the people.  We network. We dig. We call other investors. We study history. We follow the string of dots some of these people leave behind… seeing if they’ve left behind a trail of destruction or a trail of wealth.

The quality of the business (barriers to entry, sound economics) is the next item we look at.  “If a great business leader is running a business with bad economics, it is the business’ reputation that usually stays intact,” Buffett once quipped.

Most people reverse this and start with pure quantitative analysis (the price, the margins, etc), which is a waste of precious time most often.

Our success has come from either ignoring wiggles or taking advantage of them when it’s in our favor, and in the meantime letting great people and great businesses bought at reasonable prices do the heavy lifting for us.  And if you must act as investor, my advice is to act on that.

Look at the Stripes

In the end, the intrinsic make up of a person doesn’t change. Jose Altuve’s insatiable hunger to be the best in the world didn’t intrinsically change when this season started, nor did his skill or relentless drive. A bad slump meant he was just one step closer to ripping the ball all over the field again. And that is exactly what he is doing well into the season. He is back to being the best contact hitter in baseball today (almost batted .500 in August alone).

So much for trading Altuve away, eh?

Like Altuve, the great qualities of Superinvestors are what we want to stick to. The market always comes around to their stellar allocation principles. Their brilliance will almost always shine once again even after lulls, and the great businesses they operate increase in value almost without fail in due time.

At FMT Investment Advisory, we know sticking to winners is for winners.

investmentJose AltuveMoney ManagerNicholas GreenSuperinvestorWealth
Related posts
Gold, Silver, Bitcoin
July 30, 2020
It’s Time to Build Your Future
April 15, 2020
The Inflation Viruses to Watch Out For
March 29, 2020
Seeking the Ultimate
February 20, 2020
The Next Revolution
December 6, 2019
This Could Yield Life-Changing Gains
May 30, 2019
Call Us