Statutory: Prescribed or Authorized by Statute

Our new investment in APi Group is something we’re ecstatic to partake in and we’re thrilled to latch on to the leadership team at APi for the long haul.

The company is undervalued by any definable measure: comps, absolute, and relative values.

APi also has a long runway of profitable growth ahead.

Given the extreme dislocation in our economy over the devasting effects of COVID-19, let’s first take a look at APi’s history during rough economic periods and why FMT Advisory has recently established a stake: 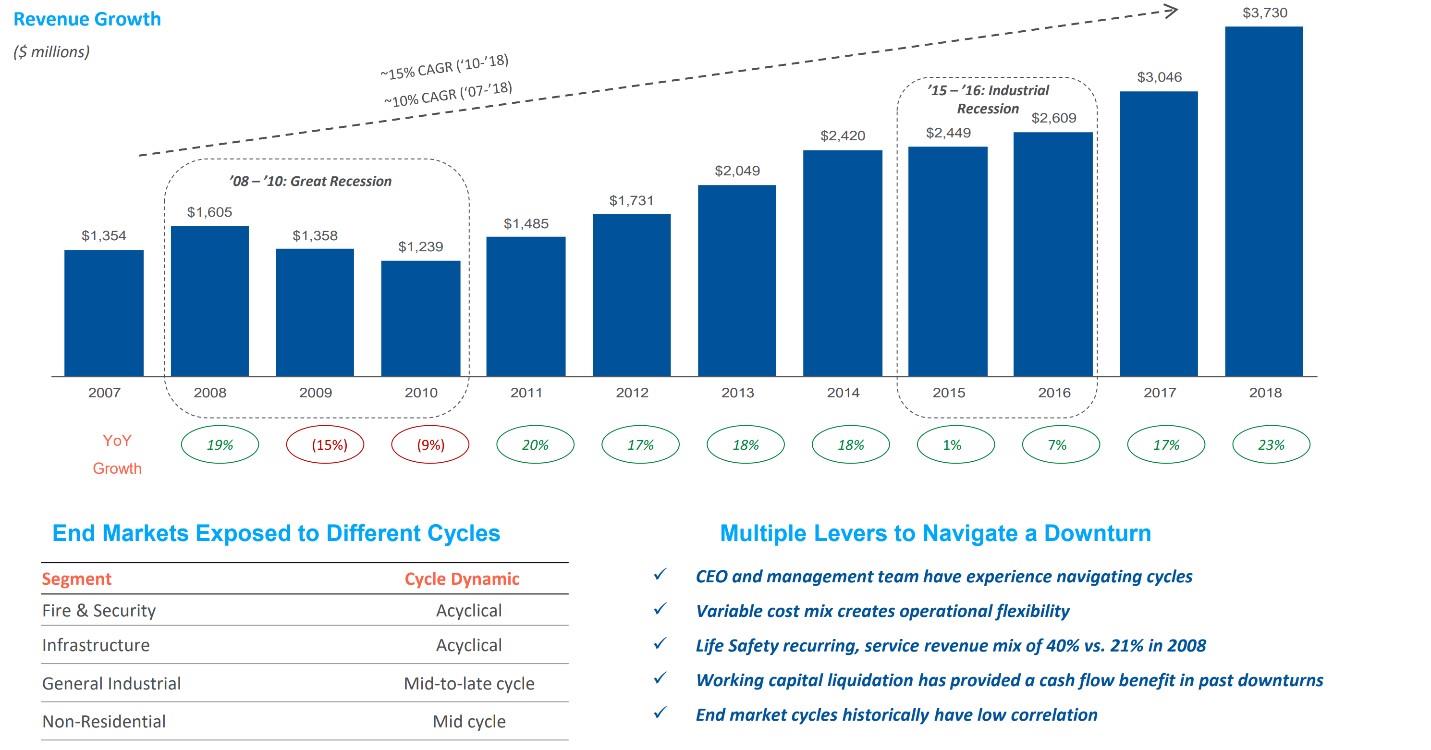 Under the leadership of CEO Russ Becker, APi Group has proven that it’s not just resilient during tough times, but it even generates strong cash flow in weak economies or end markets, which it then uses to strengthen their long-term competitive position.

With the strength of APi’s balance sheet following downturns, APi has used their excess cash to acquire smaller competitors for pennies on the dollar (see year 2012 and 2016 on Chart 2 below).

The management team navigates extreme economic volatility brilliantly. They come out of downturns as a more competitively entrenched company with more pricing power.

In all, APi has done 50+ deals over the last 15 years and every deal has been achieved with internally funded cash flow from operations. They have literally used no debt and no dilution via secondaries with this breathtaking use of operational capital:

These acquisitions have proven to be a stellar use of API’s free cash flow with a well-reasoned and disciplined strategy behind them.

Of the 50+ businesses APi has acquired since 2005, the average ROIC (return on invested capital) for these bolt-on acquisitions has been a stunning 51% (eat your heart out, Joel Greenblatt).

Reinvesting free cash flow with 51% returns on invested capital is a thing of pure beauty, especially when it also fortifies and expands your competitive position.

As they’ve expanded through acquisitions, management has also focused on growing their service and maintenance contracts in their highest-margin segments.

As a result, APi’s recurring revenues have increased in their largest and most profitable division, Life Safety, by over 100% over the last ten-years—from 20% to 45%.

A lot of APi’s business is predictable and repeatable by statute (state and municipal fire, water, and electric contracts), but now that APi has higher recurring revenues than they’ve ever had in the past, the company is in a more formidable position than ever before.

The strong (APi) truly just keeps getting stronger as they continue to leverage their scale, especially out of downturns.

The game plan hasn’t changed at APi going forward, but it’s just gotten much much bigger.

Over the last 2.5 years, the three dealmakers in the following picture have been scouring the landscape and turning over every rock while looking for the perfect deal.

They have literally passed on hundreds of investment ideas over the last few years while waiting to swoop in on the right deal that fits their strict investment criteria.

What FMT Advisory can’t convey enough to you is this: Franklin, Lillie, and Ian Ashken are business magnates that concentrate their wealth, time, and energy into just a few investment endeavors at any given time for the long haul.

To say they have skin in the game in the few businesses they participate in is almost an insult. They put their fortunes on the line. They are today’s version of a Rockefeller or a younger Buffett.

For brevity, we’ll call Franklin, Lillie, and Ashken Team Franklin, even though the last time all three were all-in on the same project was with Jarden Corporation.

For starters, Jim Lillie has been ready to nosedive into another compounder after taking a few years off from his massive success as the CEO of Jarden Corp. He also couldn’t wait to use some of his leftover cash from Jarden on the next perfect deal.

Secondly, the three of them made fortunes while creating fortunes for all shareholders in

Jarden and they work better and more seamlessly together than as one.

The three businessmen all cashed out of their shares of Jarden after they sold it to Newell Rubbermaid. This left them with substantial cash.

In Martin Franklin and Ian Ashken’s case, they have subsequently stayed busy by investing substantial proceeds from Jarden into Nomad Foods and Element Solutions (both of which Martin Franklin co-founded).

Nomad Foods has been executing brilliantly over the last few years and has a great CEO and management team in place (Franklin is a co-founder director).

On the other hand, Element Solutions has kept Martin Franklin extremely busy in the last two years. The company got off track under their old CEO and Franklin has been righting the ship and moving the right people into place.

With $300 million on the line for Martin Franklin in Element, it shows how skin in the game can pay dividends for outside shareholders. The right things will get done!

Element is in great shape for shareholders today… and Franklin is back on cruise control as a director with stellar leadership at the helm of Element now.

The time is simply right for Team Franklin to come together again and put Jim Lillie back to work… and build what FMT Advisory believes will be one of their best compounders yet: APi Group.

Team Franklin vs. Warren Buffett and the S-&-P 500

That dark blue line ending with a total return of 5,353% is Jarden. That return was a product of Team Franklin’s vision and execution. The other lines in the chart way down toward the vertical axis are Berkshire Hathaway (Buffett’s vehicle) and the broad market indices.

Nomad Foods (Martin Franklin) is also kicking Berkshire Hathaway and the S-&-P 500’s butt since its inception less than five years ago. Nomad Foods IPOd at $10 per share and is up 106% for a compound annual return of 17.33% as of this writing.

Over the same time-frame, Berkshire Hathaway is up 40%, or a compound average return of 7%. The S-&-P 500 is up slightly less than Berkshire since Nomad’s inception.

Like Jarden, Nomad Foods has been the far superior investment compared to the market or

Element Solutions (Franklin) has lagged all three thus far – Nomad, Berkshire, and the S-&-P 500 — but now that Franklin has steered Element back on the right course, it’s only a matter of time.

However, what FMT Advisory is most excited about today is APi Group.

FMT Advisory wants in on APi, and we are.

APi has been a privately held company but will be listed on the NYSE very soon —and we own shares through its OTC listing, which will simply convert to their NYSE listing in the next few weeks or so.

APi Group is a word-class business with long-term tailwinds that FMT Advisory believes is vastly undervalued —simply because it’s way off the radar having been a private company.

APi has a proven and repeatable business model through full market cycles, which has resulted in a stronger and more entrenched competitive position. APi also happens to be the fastest top- line grower in this report, and we’ve also got the whole team involved in this one: Franklin, Lillie, and Ashken.

CEO Russ Becker is a great fit to continue to be the front-man of APi as the CEO, but he has substantial firepower behind him now, which complements his already brilliant execution.

We’re simply excited to join these boys in the rebuild and build out of America’s infrastructure.

APi has never been in a more formidable position as a company than they are today.

One thing to keep in mind, FMT Advisory believes employment will sag after the re-opening of our economy despite the enormous fiscal and monetary stimulus. We believe this will provide the catalyst for a massive infrastructure bill, which Trump has wanted to initiate since election.

A huge infrastructure bill will light commodities up and begin to accelerate inflation in our opinion.

To that end, APi unquestionably has the right people, good underlying economics, and a solid future in front of them. Any near-term economic weakness will simply be used to APi’s long- term advantage.

As investors, we should utilize APi Group to build out our futures for the long haul, too.

Disclaimer: FMT Advisory doesn’t disclose our holdings or what we’re doing with them to the public in a timely way. Our desire is to benefit and prioritize our member-clients, so they are the primary beneficiaries of our value driven research. Good luck piggy backing on our ideas. We may buy or sell our holdings at any time without notice to the public. Our holdings overview is for informational purposes only. Past performance is no guarantee of future performance. You could lose all your money.