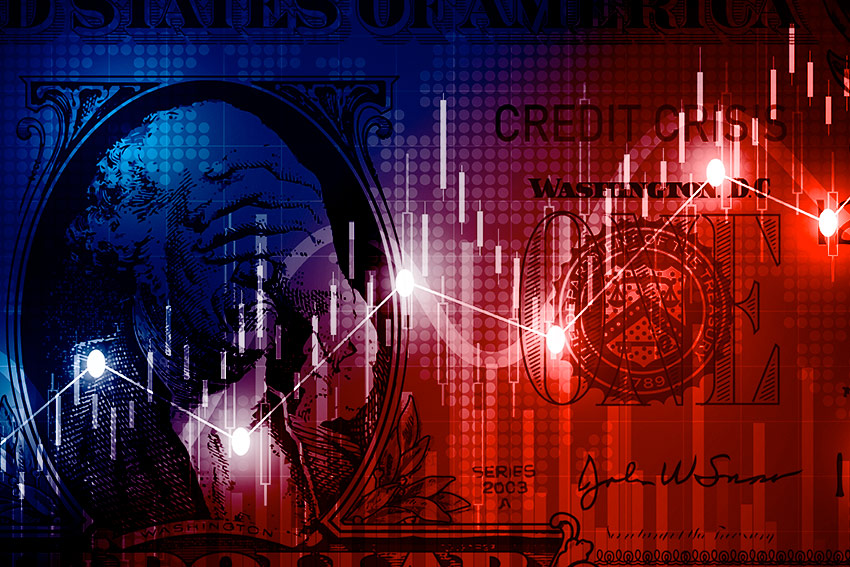 In our last communication, FMT highlighted that the Russian conflict has thrown a monkey wrench in the global monetary order.

Even though the U.S. dollar is losing considerable relevance in international trade and settlement (FX reserves), U.S. asset allocators and the general population remain asleep at the wheel.

Here’s the deal: the Russian war will end at some point, but the great financial shift will not.

The financial repercussions will endure well past the Russian war, with a permanent shift in international monetary flows and where foreign reserves get parked (a move away from the U.S.A.’s reach and dollar settlement), and this dynamic is hardly understood.

These events are transpiring at the same time the S&P 500/gold ratio has been unable to break above a 10-year resistance (chart below), thus it appears a double top has formed in financial assets.

Valuations and momentum suggest an enormous favoring of real assets (gold and commodities) as the global monetary order shifts.

This period will be in the history books for economic historians to peruse, and when they do, they’ll wonder why it took so long for everyone to wake up to exactly what was taking place as the Great Financial Shift was on.

Aside from Russia being unlikely to store dollars or U.S. Treasuries going forward, the U.S. sanctions and the freezing of Russian reserves have already given other countries a huge pause on where to hold their trade surpluses and what currencies to settle trades in.

Other nation-states, such as China (who is already an ally to Russia) and other commodity-producing countries, such as Brazil, have preferred to load up on commodities and hard assets with their trade surpluses over Western paper (dollars) for years now. China has also already started to pull out of areas where its assets (CNOOC, etc.) could be frozen by the U.S. or our allies as protectionist policies arise.

These events are inflationary for the U.S. dollar because there will simply be less foreign demand and less international trade taking place in our currency as the great financial shift continues, which equates to more dollars staying home than going abroad.

Before the dollar sees any weakness, we have to watch the Federal Reserve pretend they can tighten monetary policy, with the DXY index (the dollar weighted against the euro, yen, etc.) soaring while the Eurozone is in peril (the euro is almost a 50% weighting in the DXY basket).

The supply chain issues caused by the pandemic had already started a manufacturing renaissance at home, but protectionist policies around the world due to sanctions and asset freezes are catalyzing greater deglobalization, which is a strong inflationary headwind for the U.S. in the intermediate-term.

It takes a ton of materials, energy, and labor to onshore production.

As mentioned in the last note, the war has also highlighted the enormous underinvestment in commodities and energy for the last 7+ years and the vulnerabilities and strains the economies are now facing because of it.

Countries will become more focused on ensuring adequate domestic energy supply, along with a continued push for renewable energy and the expansion of the electric grid. This transition just so happens to require a ton of energy and raw materials (copper, nickel, etc.), which is an inflationary pressure as well.

The underinvestment theme from the last 7+ years is still being widely overlooked in the markets. It is acute enough that Tesla said it might have to mine for lithium to ensure they obtain the raw materials they need for EV production.

Regarding monetary policy, we wrote “The Pivot Point,” which will essentially be the moment in time that markets wake up to the mere fact that the Federal Reserve has no intentions of running a neutral or real interest rate policy.

They are doing this with a purpose: to try to help work off the level of U.S. national deficits as a percent of gross domestic product (GDP) via inflation.

With inflation running at 8.5% and the Feds Fund Rate at .25-.50%, if the Fed merely raises rates in its upcoming policy meeting by a mere .25% “The Trigger Point” might just get hit.

With the confluence of all these factors, the population and asset allocators are currently asleep at the wheel after a decade of complacency in raw material production and U.S. dollar dominance.