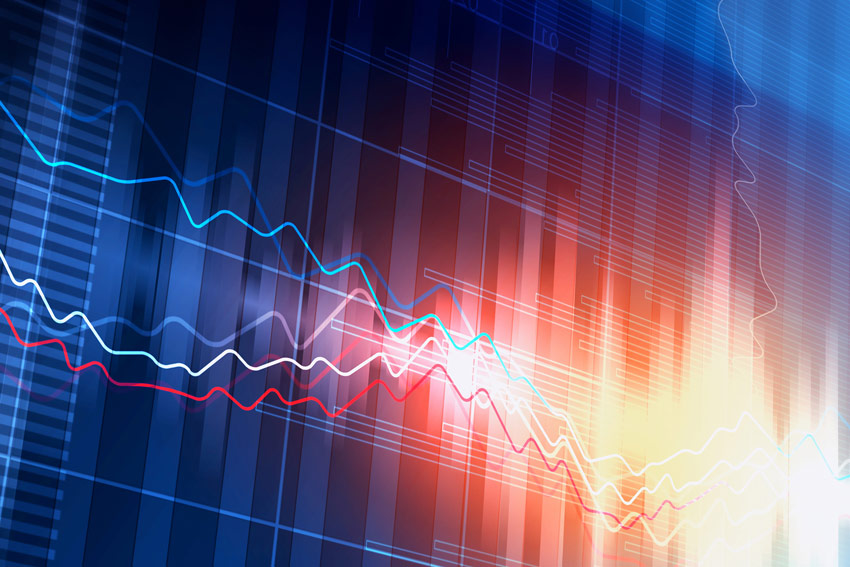 The United States has one of the fastest-growing debt-to-GDP ratios in the G20, and this is ironically why FMT is bullish over the next few years.

The Federal Reserve started to monetize U.S. government deficits before we locked down our country in 2020. Aside from Japan, we were the only large G20 country that started printing money well before the virus.

As the chart illustrates, the Federal Government’s spending started to exceed tax receipts by large amounts in 2019 (before the Wuhan virus reared its head in the United States).

This is important because the national narrative is that we are running enormous deficits and printing money primarily because of the virus.

That narrative might be convenient, but it is wrong.

The Federal Reserve actually started to monetize U.S. government deficits in September of 2019 shortly after the repo market blew up, which gave the Fed the cover to start monetizing U.S. deficits.

Just after the Fed bailed out the repo markets – the main funding source for U.S. Treasuries and mortgages – with close to $200 billion in 2019 to keep the credit contagion from spreading, the Fed announced that it would keep expanding its balance sheet (money printing/debt monetization) well into the future.

Money printing started to transpire before the virus hit the United States, and it could be why foreign investment demand for our national debt has all but vanished since 2018. 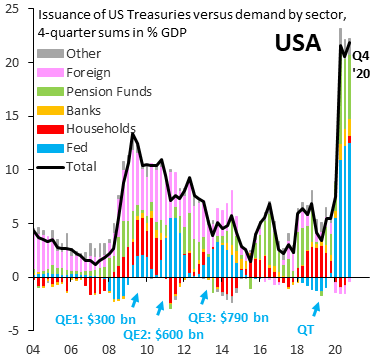 Why is this so important?

Because market moves are 99.99% correlated with the relationship to the Federal Reserve’s balance sheet, interest rate policy, and comparative country deficits, which is conveniently illustrated through the U.S. dollar index, or DXY (which represents the U.S. dollar priced against a basket of other currencies).

This is the de facto chess game being played on the global stage.

As for money management, tell me which direction the DXY is going to go and I will tell you exactly what direction assets and asset classes will move.

Let’s try to figure it all out and its overall direction.

As pictured in the chart above, natural market demand for U.S. Treasuries has fallen off a cliff over the last few years and thus government deficit spending is being largely monetized by the Federal Reserve as the buyer of last resort.

In the years immediately following the Great Recession of 2008-2009, the Fed launched quantitative easing (QE) to recapitalize the banking sector, where QE money was merely being siloed in the banks so they could be recapped.

The dollar remained strong in the aftermath of the housing collapse of 2009 even with all the QE because the market recognized this as being a non-inflationary event (unbacked dollars weren’t pouring into the system). The money was simply quarantined (pun intended) in the banking sector.

However, what we are doing today is printing dollars to fund unbacked deficits and fiscal transfers while the rest of the world has lost an appetite for our U.S. debt.

This explains why the U.S. dollar has plummeted against a basket of other currencies over the last year (chart below), even though the other countries have been printing money, too.

When the DXY falls in the chart above (the dollar is declining against other currencies), high-growth stocks, Bitcoin, and Ethereum skyrocket to name just a few assets of interest.

When the DXY falls or is stable (the dollar declining or is neutral) but interest rates move higher, value outperforms while growth companies and Bitcoin underperform.

When the DXY increases (the dollar is moving up in value against other currencies), it signals “traders” to go into risk-off mode.

The relationship between the DXY and markets has been going on for a long time but it is now moving assets with almost surreal and real-time correlations. FMT is one of the only firms in the world that has pieced this information together.

Juxtaposition any asset or fund against the DXY for the last decade and you will undoubtedly agree with FMT’s conclusions.

You just can’t make this stuff up.

The United States is essentially running a weaker currency/dollar policy in comparison to other countries, and we are doing it by design.

With all that said, FMT believes we will see the DXY retest its 2008 lows at the very least in the coming years, which is hugely bullish for our assets.

It is simply hard to imagine running a weaker dollar policy than we already are!

While it is likely we test the lows on the DXY last seen in 2008 in the coming years, there will be plenty of bounces and volatility along the way.

As of right now, the DXY has been around its support line hit back in February… which explains why in the last few months, markets haven’t been able to find a general direction.

However, given our government indebtedness, FMT is near certain the DXY will continue to decline over time as we run one of the weakest currency policies in the world.

We are well-positioned for this outcome and our accounts should continue marching nicely higher as these dynamics continue to play out.

The Federal Reserve is essentially already working on putting a lid on long-term rates while simultaneously expanding its balance sheet (debt monetization) in unprecedented terms.

They are doing this while inflation just hit 4% year-over-year!

This rhymes with history and is in perfect sync with every other precedence of currency depreciation.

The laws of accelerating issuance and depreciation are simply upon us.

FMT is well-positioned in assets that should be appreciative amongst this backdrop.